Szymon Makowski began his musical studies in Poznan Academy of Music in 2006 in the classes of conducting and violin, where he acquired the Bachelor degree in 2009 in both fields. He continued his education in conducting and received the Master of Arts degree in 2011. During his studies Szymon Makowski participated in numerous masterclasses led by J. M. Rodilla Tortajada (Murcia, Spain), G. Chmura (Kraków, Poland), A. Polishchuck (Faro, Portugal).
From 2010 to 2014 he has been studying in Accademia Chigiana (Siena, Italy) with Maestro G. Gelmetti, where he was awarded three times with ‘Diploma di Merito’ and Accademia Chigiana scholarships, moreover he always conducted the final concert of the masterclass. 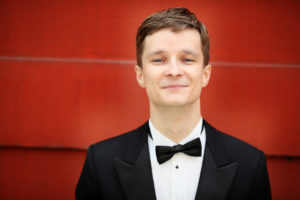 n 2011 he worked as an assistant conductor of W. E. Gugerbauer in Wroclaw Opera House, preparing R. Wagner’s ‘Parsifal’. In the same year he was given a priviledge to lead Poznan Philharmonic Orchestra on his graduation concerto. Another special concert took place in September 2011 – Szymon Makowski conducted Orchestra Sinfonica di Sanremo on the 100th birth anniversary of Maestro Franco Ferrara. From 2011 to 2013 Szymon Makowski worked as a first guest conductor of Lublin Musical Theatre and in 2012 he had many performances in Poznan Musical Theatre as well.

From september 2016 Szymon Makowski is working as a first guest conductor of the Lower Silesian Philharmonic Orchestra in Jelenia Gora, and after a succesful year in september 2017 became a conductor and orchestra chef in that institution.